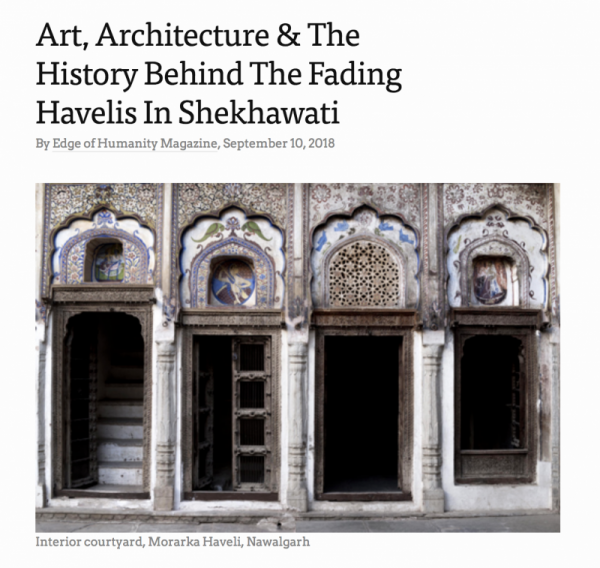 An architectural patronage in Shekhawati emerged in the early 1800s wherein the Marwari merchants sent money from distant business outposts for the construction of havelis (houses with introverted courtyards), chhatris (memorial cenotaphs), mandirs (temples) johras (stepwells), dharamshalas (community resting houses) and kuis (wells) in their home towns. The structures incorporated elements of Rajput and Mughal architecture. The courtyards, doorways, and exterior walls were lavishly ornamented with wall paintings depicting varied motifs ranging from floral and animal themes, to folk art, religious themes, images of British kings and queens, military men and memsahibs, to novelties such as motor cars, trains, gramophones and clocks whereas inner rooms and private chambers often would hold erotic images discreetly hidden away. The wall frescoes give a unique glimpse into the life and aspirations of an entire community – from their religious beliefs, folklore and day to day life, to the wonder of faraway lands that beckoned with promise of riches and trade.

While some historic structures have found a new lease on life as homestays and heritage hotels, many others face abandonment, dereliction and eventual collapse. Family subdivisions lead to multiple ownership patterns, with family members spread across an international diaspora, and, as a result, the buildings too often are relegated to a lone watchman or are locked away or abandoned altogether.

Abha Narain Lambah, conservation architect (from “Introduction” to A Fantastic State of Ruin: The Painted Towns of Rajasthan)