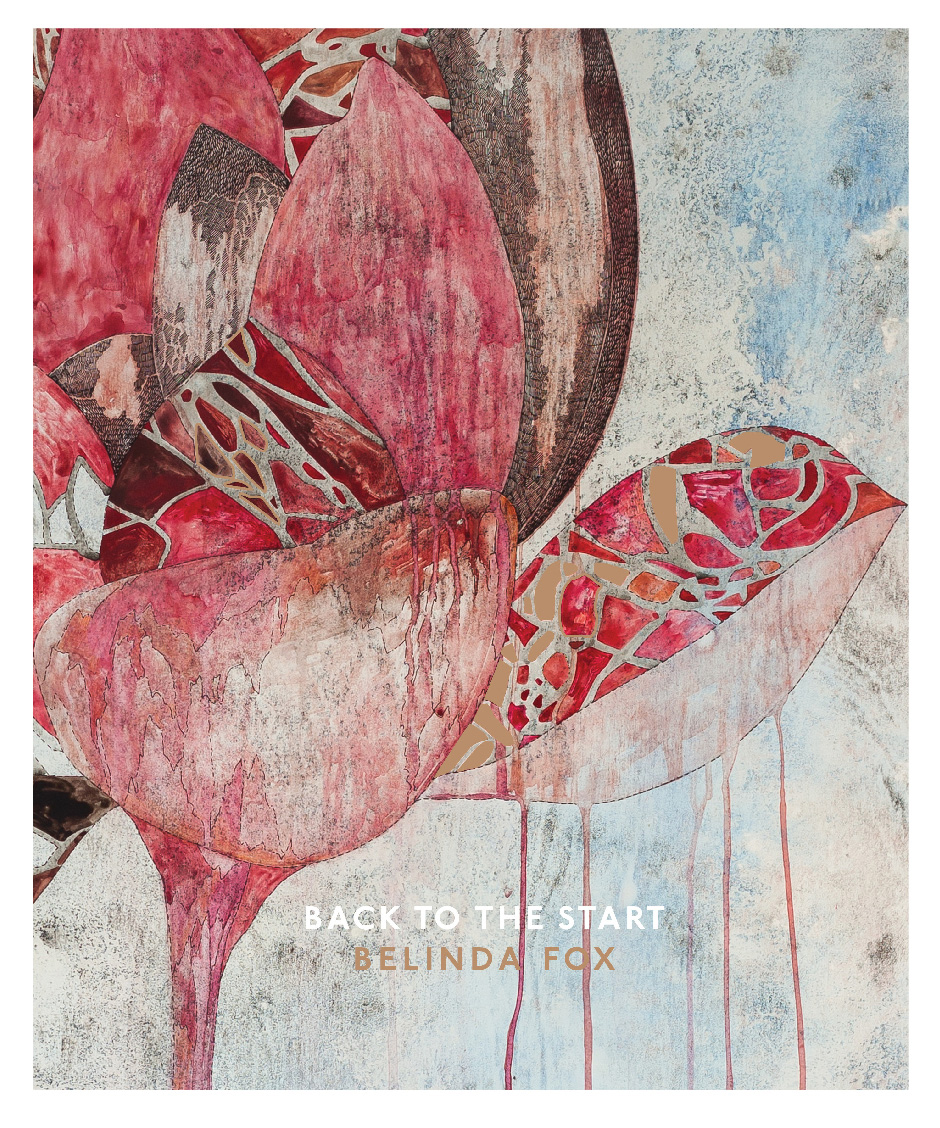 Back to the Start

Back to the Start – Belinda Fox

This is a seductive book that presents the work of Belinda Fox lovingly and lavishly. It is large in format (29 x 23.5 cm) and richly illustrated with full and double-page photographs, and even a foldout, of Fox’s evocative and sensual prints, paintings, ceramics and sculptures. Four essays comprise the text of the book, detailing the history and context of Fox’s practice from various themed perspectives.

Kate Bryan, writer and London Art15 Fair Director, tackles ‘Painting/Process’; Glenn Barkley, curator, writer and artist, contributes to the section ‘Paper/Past’; Professor Stephen Naylor of James Cook University, who knew Fox in the 1990s and has become reacquainted with her since her move to Singapore in 2012, provides the third essay, ‘Travel/Nature’; and Michael Kempson of Cicada Press explores ‘Collaborations/Connections’. The section names are given in addition to titles chosen by the authors themselves (for instance Bryan’s essay is actually titled ‘Pilgrimage’), but they provide an apt structure for the areas the authors examine.

What all four authors emphasise – apart from a mutual high regard, fondness and respect for Fox and her work – is how central Fox’s background in printmaking has been to everything that has followed. The discipline, the mark-making, the technical prowess and curiosity, the collegiate nature of sharing a studio: every aspect of learning the art and craft of printmaking is stressed as being critical to Fox’s growth as an artist.

As a printmaker, Fox’s heritage is impeccable: after studying at Melbourne’s VCA, Fox became master printer at Port Jackson Press where she helped luminaries such as John Olsen realise the idiosyncrasies of their more-familiar media in print. She has done residencies at numerous international print studios, and her awards include both the Silk Cut Award for Linocut Prints (2004) and the Burnie Print Prize (2007).

Apart from examining Fox’s printmaking roots, the essays construct a detailed biographical and academic framework through which to view her work. Bryan, for example, places Fox’s art within the tradition of Romanticism. Whereas Naylor examines it through the historic lens of landscape painting, discussing both European and Asian traditions of depicting place. All four writers also acknowledge how deeply Fox’s extensive travels and residencies throughout Asia have affected her, both philosophically and artistically.

Michael Kempson describes how Fox’s creative collaborations have helped her to grow artistically. His section contains, in a series of questions and answers, the only lengthy passages where we hear the artist’s own voice.

It is Barkley who articulates the crux of this book, why it was written, and why Fox is particularly fascinating, beyond her artistic skills and her enviable trajectory:

I think Fox represents a new model of a successful Australian artist – living in Singapore with a strong client base in Sydney and Melbourne whilst developing extensive networks in Asia. Whilst writing this essay I have thought about whether there is anything particularly Australian about her work. Its Australian specific qualities are indeed hard to find, but maybe this is symptomatic of the new model of a global Australian artist. Fox’s career trajectory could inspire others, as she is not hamstrung on the clarion call to Europe and America as a gauge for success but rather is building her reputation from the ground up and out to the region she has paid homage to throughout her career; the new powerhouse of international art – Asia.

This book is Fox’s envoy into galleries and regions of Asia she is yet to conquer. Maybe she will also be the envoy for many more talented, brave and visionary Australian artists to follow her path, and pave new ones, into Asia.